I have battled with food my whole life. I was only able to keep my weight down as a teenager because I walked a mile back and forth to school, I loved to roller skate and ride my bike. I ate away my feelings- lack of self-confidence and self-esteem. I would eat 2 lunches a day: fried pizza pockets, french fries, and big cookies the size of your open hand, all washed down with diet Pepsi. Once I started driving and had a job then my obsession with fast food increased. I could rarely decide on one place so I would hit several drive-through places to get exactly what I wanted. I would try to diet but it would always end up with me at a drive-through.

I married a man with his own set of problems, maybe I thought I could fix him or I thought I didn’t deserve better – probably both (remember low self esteem).  I gained 100 lbs with my first child and I worked hard to lose that weight- I went on a low-fat vegan diet and walked all over town. I looked better than I had since high school. Then I got pregnant again. Gained more weight but kept my weight under 200 lbs. I went on to have 4 more children. We had moved to another state and I now see that I suffered from depression. My husband told me often that I would be fat for the rest of my life. That if I left him, no one would ever love me. The thought of being alone and unloved scared me. So I stayed and did the best I could to shelter the kids from the chaos of it all.

In 2008 I decided to get off my booty and get moving. Daily walks all over the desert of Silver Springs, NV. I was probably at my highest weight ever, I would say 330 lbs or more. 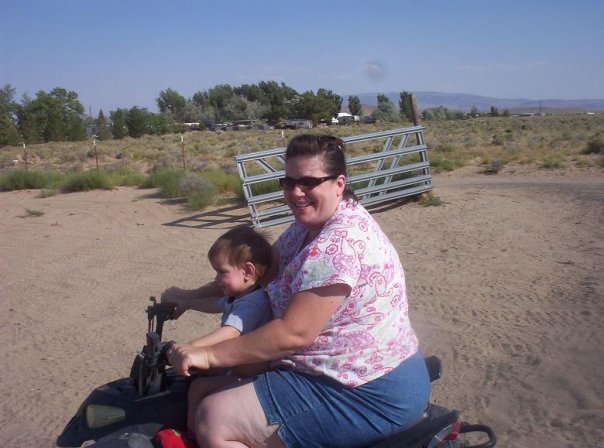 I developed plantars fasciitis and was in excruciating pain. We moved back to California and I kept working on myself. It was hard to stay focused being married to an alcoholic. He would offer to get me a pizza when he would go out to get his fix. It was incredibly dysfunctional. Eventually I found a book similar to “Eat This, Not That” at a thrift store. It would show a meal on page- like a Mexican meal, then on the next page it would show a plant based version of the same type of meal and give you the nutritional breakdown. Obviously the plant based version was healthier and less calories. The only things you could eat that wasn’t plant based was fat free fudgesicles or fat free creamsicles. I lived on those things. I was losing weight- finally.

In the beginning of 2009 my husband had picked up a new client to build a website. He tells me that it is Danny Vierra of Modern Manna Ministries. I had a huge fan girl moment. Everything I had ever learned on healthy living, treating sickness and disease naturally was from his radio show in the 1990’s. He had also owned a health food store with a vegan cafe down the street from where we lived back when I lost 100 lbs from a low fat vegan diet- I ate there often. I asked him if I could go with him- he said yes.

I was so excited to meet Danny again after all these years. I told him what I had been doing to lose weight and he encouraged me to cut out the fudge and creamsicles and go completely vegan. I did. He also asked me if I knew anyone who could run a kitchen for a vegan crusade he was putting together. I didn’t but I had worked in a camp kitchen for 4 years as a teenager and I cook for a family of 8. That was how I came to be head chef in a vegan kitchen for a vegan crusade 2 years in a row.

By the second year I had went raw- and got my certification as a raw food chef- that was fall of 2009. By the end of the year I had lost over 100 lbs and was for the first time in a very long time I was under 200 lbs. I was asked to do a raw food demo at the next vegan crusade and told I could have a table to sell items- so I filmed In the Kitchen with Debra Vol 1 (still available on my website as a download-, by this time I had been product reviewing vegan and health type items for a year on my then website Vegan Family Style. I did my raw demo in front of hundreds of people. It was amazing.

Here I was immersed in the industry but still very alone at home. I struggled daily. I hid the fact from my kids that I was no longer vegan. I cooked vegan meals at home but went out for pizza or burgers. I wanted to get back to being plant based but I was so depressed and food was my comfort.

In 2011 we moved back to Nevada. A move I didn’t want to make. Very depressed I went back completely to the standard American Diet. By 2013 I had gained all of my weight back and then some. I so desperately wanted to get back to where I was but my marriage was falling apart and I had now real friends locally. 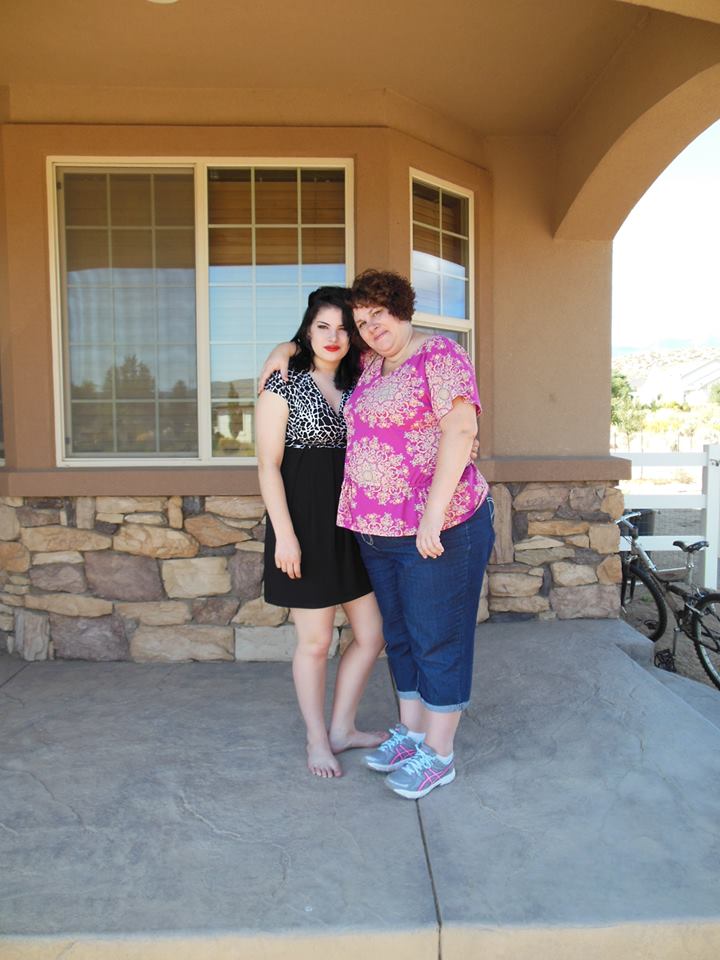 My daughter moved out of state in the Fall of 2013 and this crushed me. Did I mention that of my 6 children, I only have one daughter? Eimi and I are very close, her being gone did me in. More eating, gaining more weight.

In 2014 I started an online business that was doing pretty well. I told my husband that if he didn’t get help that he would have to move out. He moved out in February of 2015. I didn’t realize how closeted my life had become until he was gone. We spent that year having adventure after adventure. I didn’t change my diet at all but we walked daily. I did a 10k in Santa Cruz hosted by a childhood friend of mine and her event company. She and the women there become my long distance tribe. During this year I had gone to a color run in Gardnerville that Kaia Fit was at. Darnette Hoag was there and we talked. She encouraged me to go to a women’s conference at Life Point Church- she even paid my way. She gave me a card to come to Kaia for a week but I wasn’t ready yet. I did go to the conference and Nikki was a speaker! I was inspired by her story and the story of Kaia Fit. I knew that when I was ready that Kaia Fit would be the right “Fit” for me.

Towards the end of 2015 I had lost several huge social media clients and was struggling to make ends meet. I became so fearful that I dove into working more and more. This meant less time outdoors walking and staying active, as well as more stress eating. By the end of 2015 I weight about 340 lbs. I did focus more on diet in 2016 and managed to lose 60 lbs over the course of 2016. I did that same 10k again in September of after almost a year of very little activity. It kicked my butt! I had blisters, bruised toenails, and a bruised ego. Even though I had lost weight, I was way out of shape. There were really old ladies and pregnant women (like ready to drop pregnant) passing me up. As I drove home from this event I knew that I needed a local tribe. I contacted Nikki shortly after.

The end of 2016 brought sickness and a slipping accident that bruised my tail bone. So I didn’t start Kaia until January 3. I had a couple of goals in starting: no meat (I wanted to get back to plant based), and to not quit Kaia! This had to be a life time change. For the first 3 months I ate a mostly vegan diet- I still indulged in some cheese, okay.. mainly cheese pizza. I didn’t lose a single pound during those 3 months. I lost a lot of inches and strength. I was running 5k’s, 10k’s and trail runs with massive elevation climbs. I thought I would die- but I didn’t. 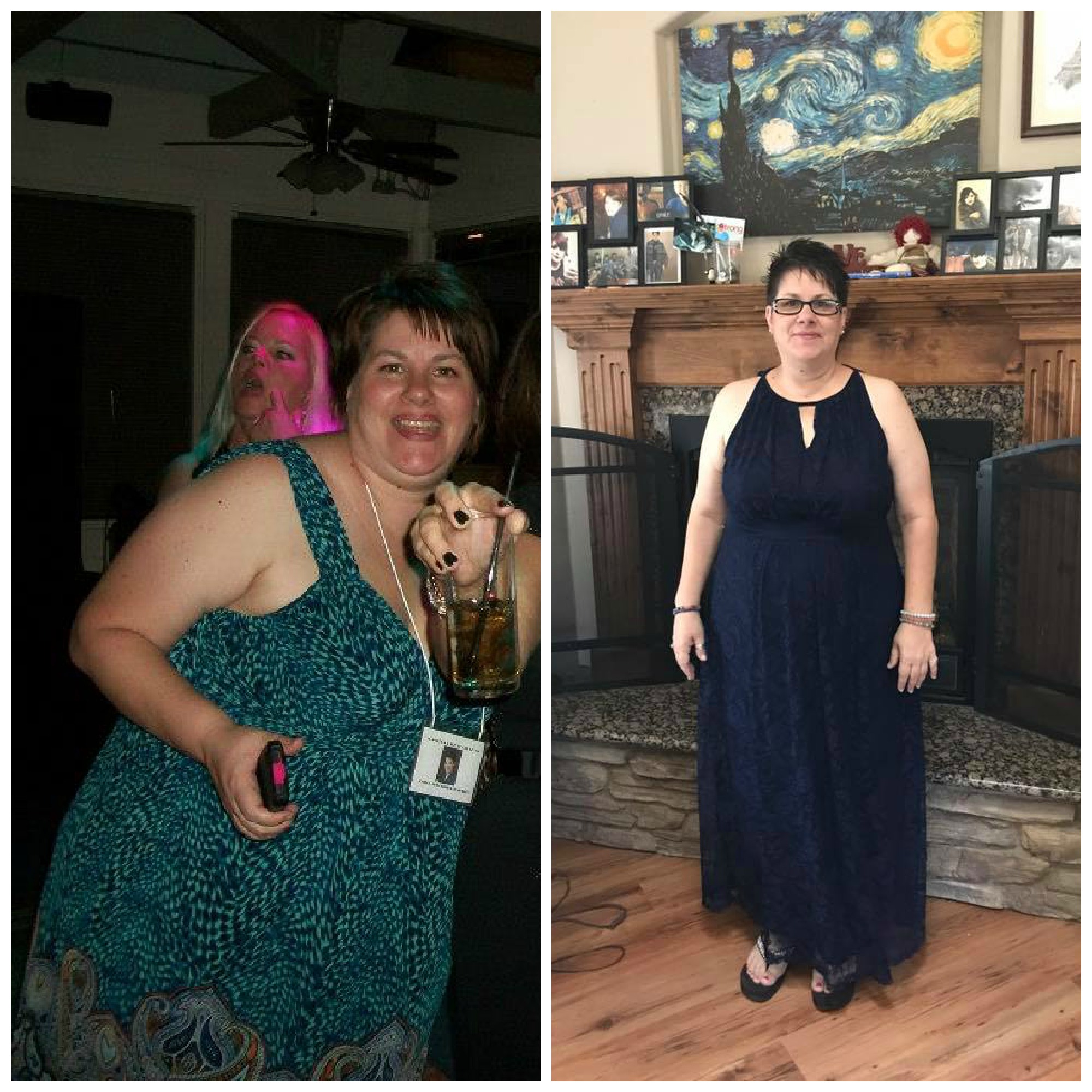 On the left I weigh almost 300 lbs 5 years ago- on the right 70 lbs down from highest weight of 340. This picture is taken after 4 months at Kaia.

In April, I cut out all cheese. I knew that if I was going to be successful in my health journey I had to take it in steps. So I had been vegetarian for 3 months, now vegan. After April- still no weight loss. I decided to go high raw for Brik. Nikki asked to be my accountability partner as she wanted to go high raw also. Ummm. Yes. This was an incredible gift that Nikki gave me. I got back to my roots as a raw vegan chef. I was creating new recipes so that I could encourage Nikki. Eventually this led to selling raw vegan goodie boxes locally. I lost 10 lbs within the first 3 days of going raw. By the end of Brik I had lost 27 lbs. I am now at a weight that I haven’t been at for 7 years. I won Queen of Kaia for most weight loss and I was very surprised. 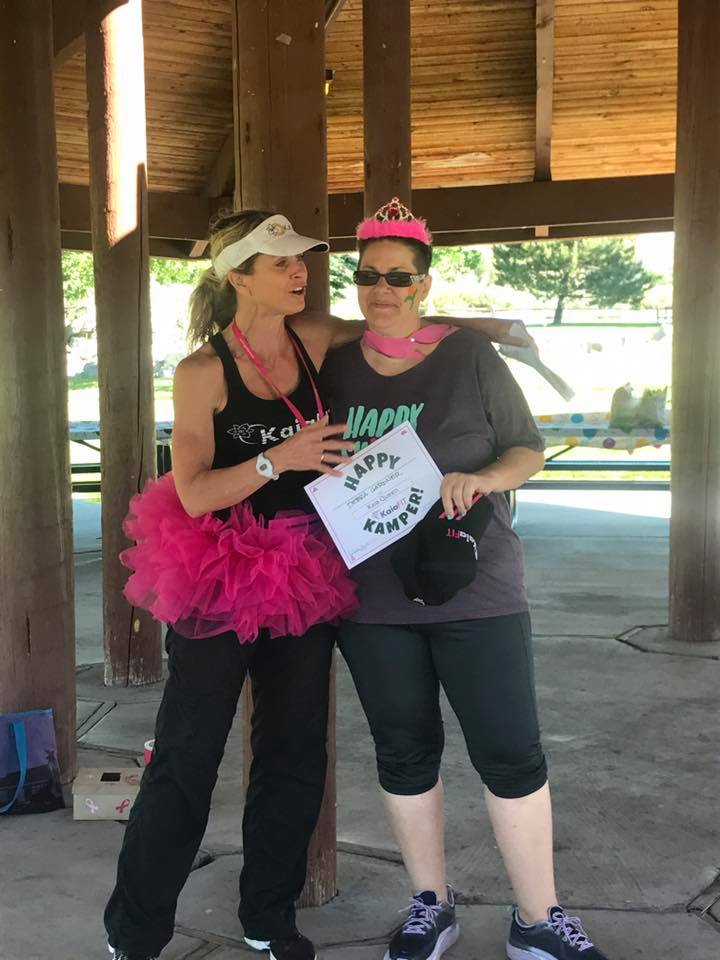 On June 17th I completed my first half marathon! It was amazing and hard at the same time. Crossing the finish line was a very emotional experience. This was something I could have never done without Kaia- the coaches, Nikki, and all of my Kaia Sisters! I have since ran the Ragnar Trail Tahoe, The Tahoe Flume half marathon, many trail runs, 5k’s and 10k’s. 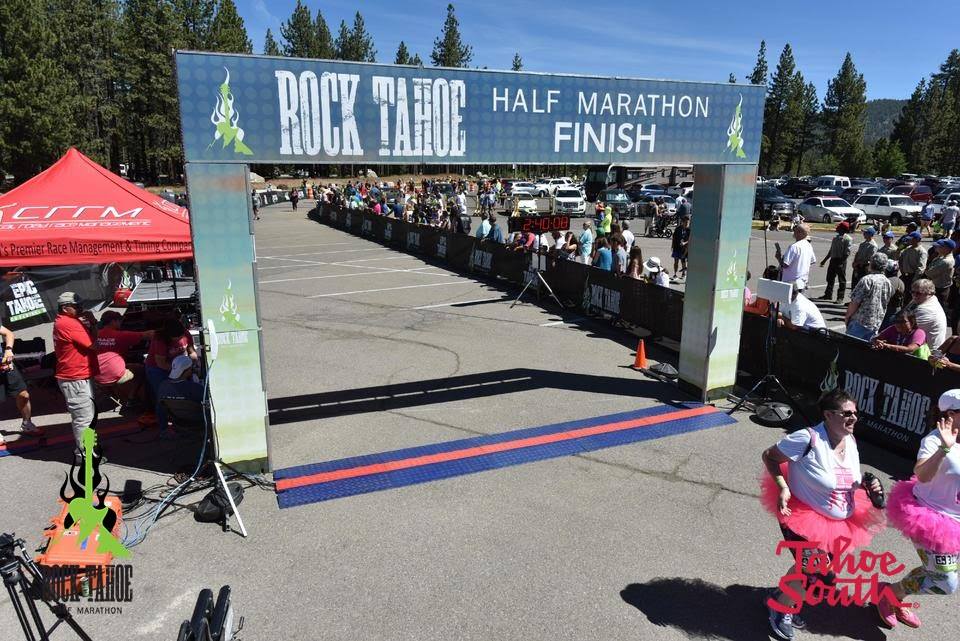 Now I am doing what I love, helping others to eat more fruits and veggies! I recently had the opportunity to speak on the power of raw foods at a Kaia Fit conference. Just before the event I found a pair of my old jeans- a size 24 – a size I had work for many years. Now I am swimming in them! I took them to the event: 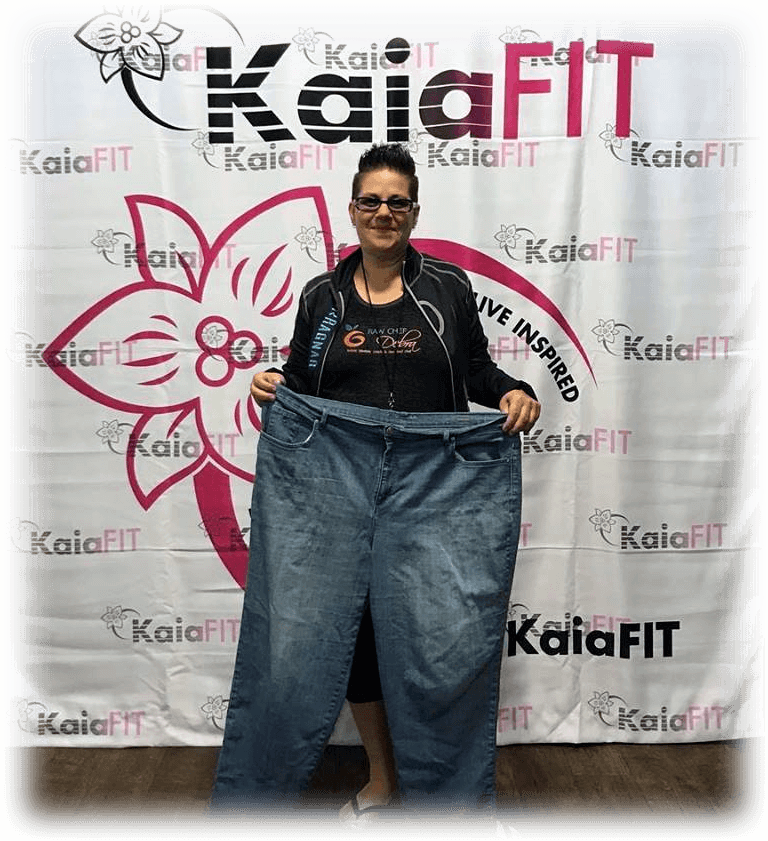 I am now down 120 lbs from my highest weight. I am not at my goal weight but every day I am getting closer and closer. I have goals that I am working towards daily. I have never been happier than I am right now. I know that Kaia Fit saved me, my coaches and my Kaia sisters helped me find my strong, they helped me believe in myself. Now I get to help others- by creating my raw vegan foods and by coaching people on how to implement a raw vegan and plant based diet.