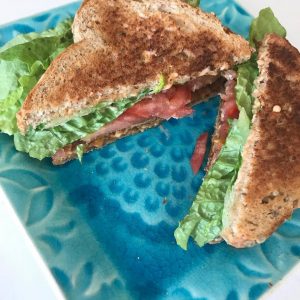 Who doesn’t love bacon? Bacon is a hard one for many to give up. I have meat loving boys in my house that I work hard to impress with my vegan cooking. This tempeh bacon did the trick. They loved it. I have already been asked to make more.

Vegan bacon is expensive and has many ingredients, my tempeh bacon has just the tempeh and some seasonings in a marinade. It is easy to make and if you want to save some calories you can bake it rather than pan fry (which is actually easier since you can do the whole batch at one time).

The benefits of tempeh are many, here are a few:

You will want to make this the night before so the marinade can work it’s magic. The marinade contains liquid smoke which you can leave out if you want but I highly recommend including it as it gives it that smokiness that we are used to in bacon.

I get my tempeh at Trader Joe’s. It is organic and comes in a 8 ounce package. I was able to get 16 slices out of it. You want to slice it as thin as you can without it crumbling.

Combine all marinade ingredients in a small pot and bring to a boil. Put your slices of tempeh in a shallow baking pan and cover with the marinade. Cover with saran wrap and put in the refrigerator overnight- or at least 2 hours. 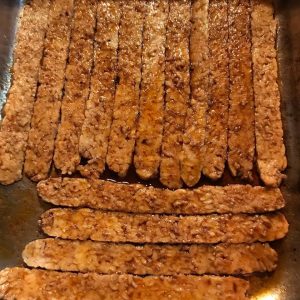 When you are ready to make the bacon, take the pan out of the refrigerator, put the tempeh on a plate that is lined with paper towels and press the side facing up with paper towels. Sprinkle each side with paprika and black pepper.

You can pan fry these in a pan that has been lightly oiled or you can bake at 350 degrees on a pan lined with parchment paper- 10 minutes and then flip over for another 10 minutes- you just want them crispy. If you are baking them you will want to brush each side with olive oil or spray them with olive oil via a Misto Oil sprayer.

I used Dave’s Killer Whole Grain bread, vine ripened tomatoes and romaine lettuce for the sandwich pictured. If you love the bacon as much as we do you may want to make a few batches over the weekend so that you have enough during the week.